A Family of Fighters 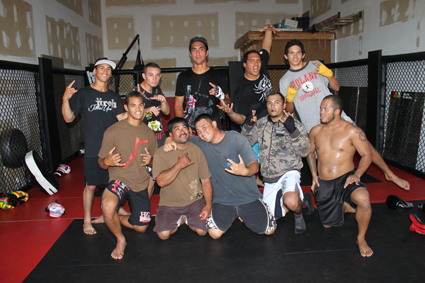 They work hard, but they also know how to have fun. The Relentless MMA family take a quick break from their afternoon training session for a quick picture. Photo by Leslie Hibner.

Take off your shoes, put on your gloves, step into the ring and check your pride at the door. For the boys who train regularly with Relentless MMA, Molokai’s only amateur mixed martial arts (MMA) club, this is standard everyday procedure.

“The sport of MMA teaches you to get rid of your pride,” said Nate Harris, who has been with Relentless MMA for the past four years. “Lots of people think pride is good, but the more humble you are the more respect you have for others, and all these boys [at Relentless MMA] have respect for each other.”

The club started about four years ago out of trainer Beau Kikukawa’s garage in Kaunakakai. Though back then it was only a handful of boys sparring, kicking and grappling on old rugs, they took the sport very seriously, said Kikukawa. Sale Sproat, who is currently Molokai’s only professional MMA fighter and one of the founders of Relentless MMA, started fighting in amateur fights just a year after picking up the sport. He earned the amateur middleweight MMA Belt in 2009, and the X1 State Pro Champion Belt in 2011.

“Everyone said Sale didn’t have a chance, that he was the underdog,” remembers Kikukawa of Sproat’s X1 State title Championship match. “He took a lot of punches, but he recovered fast and finished with a TKO [technical knockout], and in that I saw heart.”

A technical knockout –or TKO – is declared when the referee, official ring physician, fighter or the fighter’s cornermen decide that a fighter cannot safely continue the match. The fight is over and the win is attributed to the competitor still standing.

Relentless MMA moved to their current training grounds next to Na Pu`uwai Fitness Center in June of last year. While there are community members who come out and train with Relentless MMA occasionally, the regulars are Sproat, Kevin Dudoit, Randen Abafo, Jireh Torres-Umi, Nate Harris, Mark Ballocanag, DJ Kaai, and Shiloh Torres-Umi. 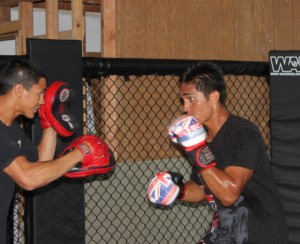 These eight boys, who say they learn as much from each other as they do from Kikukawa, train every afternoon Monday through Friday, and on weekends if there is a fight coming up. Though they may fight individually, they train as a team, partnering off and alternating between stand-up days –kicking, boxing, jabbing –and ground work –wrestling and grappling. The sport requires just as much mental toughness as it does physical fitness, and the group boasts a drug and alcohol free club.

“It’s a great way for the boys to stay physically fit and relieve stress,” said Kikukawa. “They’re off the streets and are not doing drugs or drinking, so it’s all positive motivation here.”

MMA on the Rise

MMA is a full contact combat sport that uses both striking and grappling techniques from a variety of other fighting styles like Brazilian jiu-jitsu, boxing and karate. The largest MMA promotion company worldwide is the Ultimate Fighting Championship (UFC), which was founded in 1993. In Hawaii, the sport’s popularity has grown wildly within the last decade –fights have become some of the most anticipated sports events for locals, who vie for live tickets and crowd around the TV to watch from their homes.

“I love the sport so much because it evolves constantly –the jiu jitsu used last year is not good this year, we evolve daily here. It’s a thinking man’s game,” said Kikukawa.

Because of its nature, the sport has a damaged reputation for being unruly and brutal. However, since the Unified Rules of Mixed Martial Arts were passed in 2009, the sport has seen much more rules and regulations meant to ensure a safer sport. The rules call for pre-fight medical examinations and drug tests, the presence of a medical professional on the scene, and (despite the persistent misnomer that the sport features unregulated, free-for-all fighting) identify a long list of unpermitted foul conduct.

“When you’re in a fight on the street, you’re just mad and you don’t think,” said Abafo, who has been training with Relentless MMA for the past two years. “But when you’re in the ring, you’re a smarter fighter and in MMA, you try to use every [part of your body].” 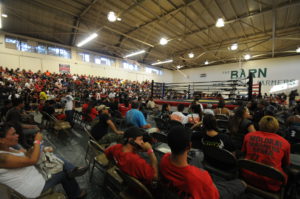 Last year, Molokai hosted its first ever live MMA event, the Battle at the Barn, which featured 15 amateur fights in one night. With more than 1,500 fans in attendance, the event sold out with a line that wrapped around Molokai High School’s (MHS) gym. It was clear that there was a demand for the sport on the island.

However, due to unruly behavior involving drugs and alcohol outside in the parking lot during the course of the event, MHS administration has banned any further MMA events at the high school, according to Kikukawa.

Kikukawa said this was unfortunate for fans of the sport because that one event generated enough funds to keep Relentless MMA going for years. He said he has been trying to find another venue on the island, but has not been able to get approval.

“All the fighters and fans inside [the Barn] were respectful to each other, but outside, we couldn’t control,” said Kikukawa, who always stressed the importance of fighting within a controlled environment.

Sale Sproat, who is currently 2-1 in his professional MMA career, will be facing Douglas “Moura” Silva, who trains under famous UFC fighter Anderson Silva, for the Pro Middleweight Title at 185 pounds.

Jireh Umi-Torres, 22, will be making his professional debut at Destiny: Na Koa, in the Pro Bantam weight Match against Ian Delacuesta, who trains with 808 Fight Factory on Oahu, in the 135 pound weight class. Out of nine amateur fights, Umi-Torres has only lost one.

Umi-Torres, who got into MMA by first wrestling in high school, said he is more excited than nervous about his first pro fight. When asked about the strategy he plans on bringing to his first professional fight, he smiles and says simply, “Be Relentless.”

To support or sponsor Relentless MMA or for more information, call Beau Kikukawa at 336-0479.

One Response to “A Family of Fighters”