A Decade of Environmental Leadership 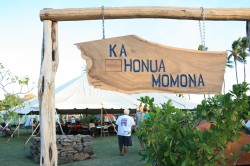 The E Alu Pu network joined at the Ka Honua Momona International (KHM) Ali`i Fishpond August 15 to 18 to participate in a learning exchange and celebrate their 10th anniversary of environmental stewardship. Photo by Jessica Ahles

As a child, Uncle Mac Poepoe fondly remembers fishing down at Mo`omomi Beach with family and friends, but as time passed, he began seeing the area increasingly populated with unfamiliar boats and people, over-fishing in its waters.

“I said, ‘Hey we’ve got to do something about this because if this continues, we’re not going to have many fish left for ourselves,’” said Poepoe.

He came together with a group of Molokai fishermen and community members who decided they needed more public input as to how environmental resources are managed.

“This is basically a grassroots community movement,” said KUA Executive Director Kevin Chang. “To know that after 10 years, they’ve continued informing, sharing and learning from each other about what’s going on in their own places, this is like coming full circle for its 10th anniversary.”

In 2003, representatives from 13 communities gathered on Molokai for E Alu Pu’s first learning exchange, according to a KUA news release. This year, the Office of Hawaiian Affairs awarded an $8,000 grant to bring 100 community leaders from six islands to Molokai’s Ka Honua Momona International (KHM) at the Ali`i Fishpond.

Ka Honua Momona, meaning bountiful earth, is a local nonprofit organization dedicated to help Molokai return to momona or abundance, which is part of the community’s cultural tradition.

The KHM headquarters at the fishpond transformed into a campsite from August 15 to 18 as participants shared and learned about each other’s projects as well as helped build effective resource management skills.

“A lot of us share the same problems, share the same vision, and share the same goals and so coming together like this is really helpful and beneficial for us as an organization and for the communities we represent,” said Jessica Casson, a representative of Oahu’s Malama Loko Ea, which strives to restore and preserve Loko Ea Fishpond in Haleiwa.

Over the few days, E Alu Pu discussed management strategies for community-based subsistence fishery areas such as Mo`omomi, as well as what being a member of E Alu Pu entails and the network’s values and obligations moving forward, according to Chang.

“We’ve been learning a lot of different cultural things,” said Haunani Kaiminaauao, from Hui Malama O Koloa on Kauai, which is currently working to reduce traffic congestion by finding alternative, cleaner transportation options. “We’ve learned about restoring lo`i, which are the kalo beds, and about the history of the fishponds here and the ohana that have been working on them.”

On Saturday, network representatives also broke into groups and traveled to different sites across the island including Halawa Valley, where members planted taro and removed invasive weeds; Hoolehua, where planted a line of banana trees; and the Kaloko`eli  Fishpond in Kamiloloa, where they helped remove mangrove, promoting the health of the pond.

“[Removing mangrove] is a lot of hard work but it’s very rewarding because I’ve seen the results,” said Wally Hoito, from Oahu’s Ewa Limu Project. “I think we did pretty good and I’m happy to support Uncle Merv [KHM fishpond caretaker] and the fishpond.”

An important part of the gathering, according to Kauwila Hanchett, an executive director of KHM, is the connections that are made and the relationships that are built while working towards a common goal.

“This is my first time [participating in the gathering] and I think maybe as a whole, we‘re learning more about what it means to be part of this group, what we can do when we’re united, and what we’re able to do that we couldn’t achieve alone,” said Hanchett.

With the motivation and support from E Alu Pu and KUA, community nonprofits are able to better organize and build new resource management policies as well as connect with state government to implement them, according to Chang.

“What Uncle Mac and other communities were working on 20 years ago is finally happening at the government level,” said Chang. “The government told communities that they could create laws to regulate their own fisheries. In the past four years, the state has started looking at it and taking it seriously.”

In the future, Chang hopes to see the E Alu Pu network become even more effective and united, driven by their desire to have collective influence in their communities. He describes the E Alu Pu members and their ambition to preserve Hawaii’s cultural and environmental heritage as “kipuka,” meaning “opening” or existing land that volcanic lava surrounds, but doesn’t fully cover.

“When the volcano erupts and the lava flows, it covers everything,” he said. “But there are little places—like seed vents—within the lava flow where it starts to flourish again. What once was there returns, and most of these people are personally, as human beings, kipuka because they still retain some of the knowledge of the past.”

Poepoe views the last 10 years as a success, however, he said there is still work to do.

Still, he believes the network’s future is on the right track, looking to their past for resource sustainability.

“We like to talk about our ancestors, our kupuna,” said Poepoe. “They blazed the trail for us and they set the path for us. If you follow that same path, you can be just as successful as they were…it’s that simple.”