A Chance at the NFL 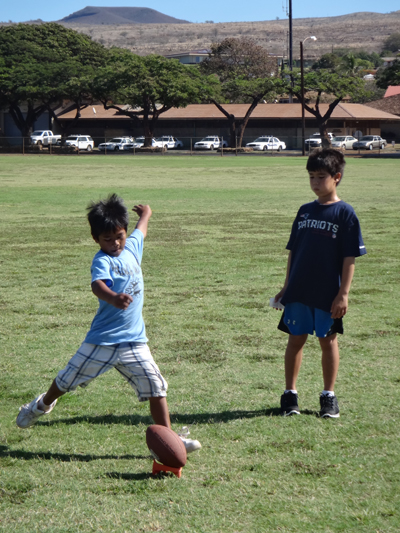 Naea Starkey, 8, and Owan Svetin, 8, practice their punts before the competition.

Footballs flew up and down Kaunakakai Ball Field Saturday morning as keiki ages 6 to 15 practiced their punts, passes and kicks. This is the second year Molokai has hosted the nationwide Punt, Pass and Kick (PPK) Competition, sponsored by the National Football League (NFL).

“It’s a good opportunity for the kids to participate in a physical event, especially with football season coming up,” said Mike Mangca, Maui County’s Recreation Leader for Molokai. 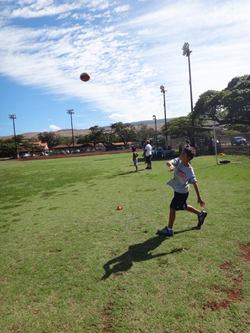 Nainoa Kahale, 12, throws a football spiral like one of the pros.

Each child gets the opportunity for one punt, one pass and one kick, and a score is calculated based on distance and accuracy, according to NFL PPK’s website. The top finishers in the county will qualify for the sectional competition. The top four finishers in each age group at sectionals will advance to a national competition that usually takes place in January. In 2010, the national competition was held at Qualcomm Stadium before a San Diego Chargers playoff game. More than three million boys and girls from around the country take part in the PPK Competition every year.