A Boatload of Cheer 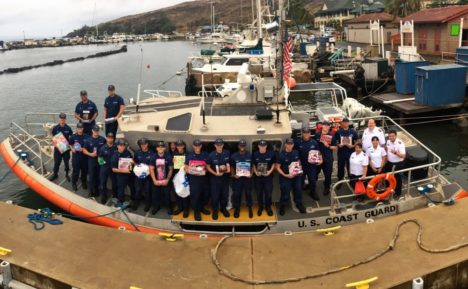 Earlier this month, a boat docked at the Kaunakakai wharf loaded with 800 toys and clothes for Molokai keiki. The holiday blessing was brought to Molokai in a partnership between the Coast Guard Station Maui and the Salvation Army. The 45-foot Coast Guard vessel docked at the harbor on Dec. 10, where staff helped to unload hundreds of Christmas gifts.

In previous years, the Molokai ferry has assisted the Salvation Army Kahului office in the mission, but after the ferry closed operations earlier this year due to financial hardship, the Coast Guard stepped in to help.

Lt. Romelia Howard of the Salvation Army’s Kahului office said her division helps more than 600 families in Maui County during the holidays. Coast Guard staff was eager to assist.

“The crew really jumped at the opportunity to help out and make this happen,” said Petty Officer 1st Class John Murphy, executive petty officer at the Coast Guard Station Maui, in a press release. “Many of them haven’t been a part of something like this before. We’re pleased to partner with the Salvation Army on this and bring these gifts to Molokai.”

The gifts were distributed to Molokai keiki through the Salvation Army Molokai office.