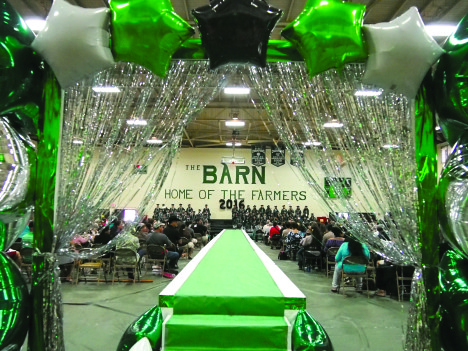 “This is unprecedented,” said Principal Stan Hao. “This is the most [valedictorians] we’ve ever had. In farming terms, we have a bumper crop of really smart kids.”

In the high school’s graduation ceremony for the class of 2016 last Friday, student accomplishments were honored, songs were sung, tears were cried and Farmer pride was on display.

Members of the class of 2016 helped the school claim four MIL team championships in football, girls basketball, baseball and boys volleyball, as well as individual champions in wrestling, track and field and judo, according to Hao.

“One hundred percent of our valedictorians and salutatorian were part of our athletic program,” said Hao. “This shows that you can balance academic and athletic pursuits simultaneously. This is an extremely celebrated class with academics as well as athletics… because of this, there is much for the class of 2016 to be proud of.”

In addition to athletic successes, the class has proved that Molokai students are well-deserving of higher education at the Ivy League level. Among this year’s graduates, students will be attending Brown, Columbia and Stanford universities, among dozens of other colleges. 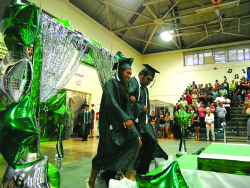 Valedictorian Kaimana Kahale reminded fellow students in his speech to be thankful for there they came from and the help they received along the way.

“On Molokai were fortunate to learn early on to appreciate the simple things,” he said. “And that lesson of gratitude will take us a long way. It ultimately will be the key to our happiness and success. Whether away in college, trade school, working on Molokai or moving to a new place – let us be reminded of gratitude for others.”

Salutatorian Geisha Mae Nunez shared that she was born in the Philippines and moved to Molokai when she was 5, not knowing a word of English.

“I was greeted with friendliness…” she recalled. “I’m leaving this place with more friends than I could ask for… Molokai taught us to be selfless, caring and hardworking.”

For state wrestling champion and Valedictorian Cendall Manley, lots of lessons can be learned on the mat. 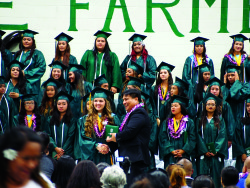 “Think of life in terms of a wrestling match,” she said. “It has been said that wrestling is 90 percent mental and only 10 percent physical. In other words, in order to win wrestling, you have to believe in your mind that you can… Guys, we’re about to step out on the mat of our life…We have been given the tools, we have worked hard, and now we ned to go out there and give it our all.”

Other Valedictorians, who each shared one minutes of words with fellow classmates and audience, were Jordan Boswell, Sabrina Curtis, Keaaokahonua Davis, Kysha Kawano, Oceana Madani and Misty Parker.