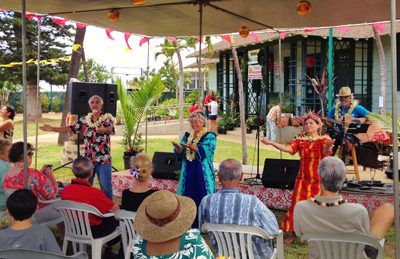 The front lawn of the library was abuzz with excitement as attendees enjoyed hula performances with mele provided by Lono. Photo by Todd Yamashita.

“Libraries are not just warehouses for books,” said Greg Kahn, President of the Friends of the Molokai Public Library. “They are experiential.”

After 75 years of operations, many members of the community have formed their own special relationships with Molokai Public Library. For some, it is a meeting place for the literary-minded, for others it offers a setting for music and cultural performances, and for everyone, it is a place to learn something new.

Last week, the library held its 75th anniversary celebration on the front lawn, which featured music from local bands, mele and hula by `O Hina I Ka Malama and guest speakers from across the state.

The island’s only library opened on May 21, 1937 and has been listed on the Hawaii Register of Historic Places for the past nineteen years. It was originally located near the Kaunakakai Wharf, but was later moved closer into the center of town, according to library records. It is one of eight libraries in Maui County and one of 50 in the state of Hawaii.
The head librarian Sri TenCate has been working at the library for the past 26 years. She was voted State of Hawaii Librarian of the year in 2000.

“We are very proud of this library and all it has done for this community,” said Richard Burns, Hawaii State Librarian. “There are changes coming, [including] new laptops, HighTech Academy, digital and technology literacy training.”

There are a number of other programs that are offered through the library, including language courses, Microsoft courses, dance and music courses, according to Kahn. The Friends of the Library, which he describes as “a support group for the library,” is open for all to join at a $1 lifetime membership fee.

“The library is a symbol of our community,” said Kahn. “It is an institutional place that belongs to us.”