7 to Wrestle at States 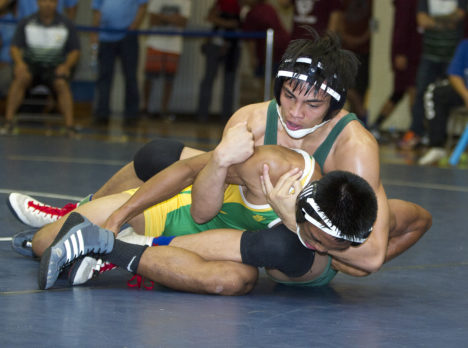 Seven Molokai wrestlers qualified for the state competition after top finishes at last weekend’s MIL Championships at Maui High School. Though only first and second place finishers at the event go on to the state championship, the Molokai High School Boys and Girls Wrestling team at 13 student athletes finish in first, second or third place in the MILs.

Sweeping the competition on the mat for first place in the 220 pound division was Martika English. Second place finishers were Keeya Bicoy at 117, Kelsey Bicoy at 132, Taye Mowat 138, Caele Manley at 138, Hauoli Caparida at 145, and Makana Kaahanui at 225. Coming in at third place were Alea Davis at 102, Jayse Rillion-Lalim at 106, Jake Samaniego at 132, Maile Kaahanui at 145, Diego Deponte at 152 and Jarron Boswell at 160.

Many matches were so close, said Head Coach Randy Manley, but overall he was pleased with Saturday’s outcome and excited for all heading to states.

“It was a good day of course but we would have liked to see more champions,” he said. “Three of our boys in the finals lost by one point. We’re going to work hard this week to prepare for states. Our kids have big hearts and lots of courage so we’re looking for good things next weekend!”

The State Wrestling Championships will be held this weekend at the Blaisdell Center Arena on Oahu.