Molokai’s introductory course in judo is complete. The Farmers ended their first-ever judo season at last Saturday’s state competition, and while none of them took home a medal, the coaches were pleased to see how far their developing judoka, or judo students, have come. 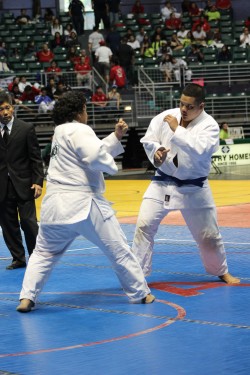 Three Molokai judoka were seeded within the top four in their weight classes going into the tournament. Senior Kaila`oe Cabanting (115) and junior Kui Han (285) went in ranked third, while freshman Ikua DePonte (145) went in fourth.

However, Molokai struggled in the first round, as freshman Martika English was the only Farmer to come up with a first-round win. English notched an ippon, a match-ending move worth a full point, against Kamehameha-Kapalama’s Kainoa Ah Quin.

“I felt kinda nervous but when you get on the mat it actually all goes away,” said English. “I used a tai otoshi. That’s when you stick your feet out to the side, and you pull them over your shoulder and they fall straight on their back. It’s one of my favorite throws.”

Han won Molokai’s second match of the night by pinning Pearl City’s Kaniala Kaohe within the first minute of the consolation rounds to earn an ippon. Han, the final Farmer standing, lost in the second round of the consolation bracket. English was defeated in the championship quarterfinals.

“Even thought a lot of them got eliminated in the second round, they just had a good sense of sportsmanship,” said girls’ Head Coach Kalei Kawaa. “… I’m actually really glad that a lot of them experienced this kind of loss. I think it’s gonna fuel them for next year.”

For the coaches, the state competition was all about getting their judoka exposed to stronger opponents, a bigger venue and the style of refereeing. Referees at the state level call matches slightly differently than in the Maui Interscholastic League, said Maioho. For example, penalties that result in disqualification in league play may only get a warning at the state competition.

DePonte, who nearly engineered a come-from-behind first-round victory, said now that he’s seen the level of competition, he plans to train in the offseason and come back stronger.

“I didn’t expect it to be this tough,” said DePonte, who won a state judo competition as a kid. “[I learned] just … not to rush through it, and really study my opponent to see what they’re about to do.”

Maioho said practicing the basics, including proper safety techniques, took about half the season. With those lessons now out of the way, he said, they can start next season teaching combinations and more complicated throws.

“I think a lot of the families really appreciated how much the kids learned in one season,” said Kawa`a. “Just sitting here and watching the competition, [some parents are] completely lost. It’s a hard sport to just sit down and catch on to.”

The Farmers have a young team to build upon. Half of the 13 judoka on this year’s team were freshmen, and with only one senior among the seven who qualified for states, the coaches hope to bring at least six judoka to states again.

“The team, they get [it], they just gotta have more technique,” said DePonte. “… I hope these same guys stick with it and come next year so we can be a little bit stronger.”