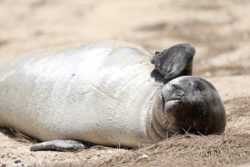 L11 sleeps on the sand in Kalaupapa earlier this year. Photo by National Park Service/G. Puig-Santana.

On Sept. 19, a resident found and reported a young female seal dead on the south shore of Molokai. The death of the seal, known as L11, marks the sixth seal death on Molokai since the beginning of the year – “an unprecedented number of deaths over a 9-month time period,” according to officials from the National Oceanic and Atmospheric Administration (NOAA). An investigation is underway.

L11 was born last year in Kalaupapa. Hawaii Marine Animal Response Molokai Outreach Coordinator Todd Yamashita said she had been known to haul out on lawns and sandy parking lots on the east side of Molokai, describing her as curious and healthy. He called her death “heartbreaking.”

NOAA has not been able to perform a full post-mortem examination, known as a necropsy, as this time due to COVID conditions, which will confirm if the seal’s death appeared to be intentional and in line with two other seal deaths on Molokai in April that were determined to be human-inflicted. Three seals found dead earlier this year were too decomposed to determine a cause of death.

NOAA Fisheries Office of Law Enforcement and the State of Hawaii Division of Conservation and Resources Enforcement (DOCARE) is investigating the recent death and the deaths of the other five seals on Molokai this year.

“The worst part of this is that there is a pattern of seals being killed here,” said Yamashita. “I know a number of fishermen who do not like our monk seals and do what they can to avoid them. But the violent act of killing a monk seal — that is something totally different, and certainly not representative of our island and the people who live here.”

Hawaiian monk seals are highly endangered and only about 1400 individuals are alive today. The species is native to Hawaii, has been here millions of years and Hawaii is the only place they live in the world. They are protected under federal and state law, and it is illegal to harass, harm, pursue, hunt, shoot, wound, kill, trap, capture or collect them.

Molokai often has more seals being born and living on the island than any other Main Hawaiian Island. Yamashita said the island “represents hope for this endangered species.”

“First of all, the Hawaiian Monk Seal was here in Hawaii thousands of years before Hawaiians came on the islands,” said resident and activist Walter Ritte. “Second, the seals belong to the realm of Kanaloa, the ocean god and we Hawaiians belong to Pele’s realm, the land. So be respectful of Kanaloa’s children.”

Ritte said protecting La’au Point from the development of a resort more than a decade ago brought new awareness to Molokai’s monk seals.

Ritte recalls when seeing a monk seal on the island was a rare and celebrated event.

“I remember as young boy in the 50s and 60s, that every time a seal was seen on a Molokai beach, families jumped in their cars to go see the seals, ours included,” he said.

For younger generation lawai’a Laa Poepoe, he said he feels education about seal behavior to dispel misinformation about seals is no longer effective, and strict enforcement is the only option left to protect them.

“An abundance of outreach and education has been provided to the public, disproving commonly-held beliefs that monk seals ‘steal OUR fish!’” said Poepoe. “Critter cam footage of foraging Hawaiian monk seals shows their daily diet consists mainly of eels and squid at depths beyond 100 feet, yet the seal killings continue. At this point, a seal-hating individual won’t change their position. The option of education has been exhausted, and rational discussion has failed. The most effective means of protection that remains is in heavy enforcement and prosecution of those who harm a critically endangered species.”

Diane Pike, who monitored monk seals on Molokai for 13 years in various official capacities, reiterated that Hawaiian monk seals do not “eat all of the food,” and in fact, one seal eats about one pound of fish per day per square mile of ocean.

“There is no justification for these deaths, period,” said Pike. “I am deeply saddened and appalled by the behavior of a few people.  Their actions are inexcusable and criminal.”

Yamashita said many Hawaiians see a parallel with the seals.

“Most people I know love these creatures and identify with their struggle,” he said. “This is a Hawaiian animal that has only Hawaii to call its home. And whether or not it can survive, is something still hanging in the balance.”

He urged residents to appreciate seals from afar, however.

“What can we do? It might sound anti-intuitive but the best way to care for these animals is to keep them wild and keep your distance,” said Yamashita. “Hawaiian monk seals are wild animals and they can be dangerous to people if confronted. When we see them on shore, this is a critical time for them. They only come to shore to rest, molt and give birth and they spend a third of their time out of the water. If we’re interacting with the seals we’re likely doing two things: we are disturbing their rest or we are habituating them to people. Getting them used to people is the most dangerous thing for people and the seals.”

Report all monk seal sightings, injuries, and strandings to the NOAA Marine Wildlife Hotline at (888) 256-9840.

If you have any information about the Molokai monk seal deaths, call the NOAA Law Enforcement hotline: (800) 853-1964, the DOCARE hotline at (808) 643-DLNR or the DLNR Tip app, all of which allow anonymous reporting.