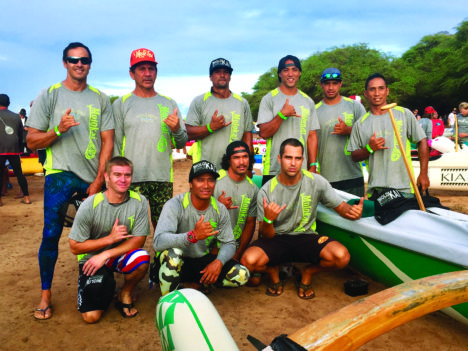 The crew of Molokai’s Wa‘akapaemua pulled an impressive feat during the 2017 Molokai Hoe, arriving at 22nd place overall against some the best canoe paddlers in the world, with a time of 5:34:49.

The Molokai crew, competing against more than 1,000 paddlers from 100 other teams, averaged 7.3 miles per hour in the Ka‘iwi Channel between Molokai and Oahu.

This year’s race also had another surprise. Besting their time in more than 12 minutes compared to 2016, Big Island’s Red Bull Va‘a came in first place this year with a time of 4:50:01. It is the first time a Hawai‘i-based team takes first place in this prestigious race since 2005. But it was hardly an easy race; the crew of Red Bull Va‘a arrived only 31 seconds ahead of last year’s winner Shell Va‘a of French Polynesia.

This year marked the 65th edition of the race, one of the longest running annual team sports events in Hawai‘i, second only to football. In its first edition, on Oct. 12, 1952, a Molokai canoe made of koa and named Kukui O Lanikaula beat two other teams to arrive in Waikiki with a time of eight hours and 55 minutes, still a remarkable feat for a canoe made of heavy koa wood.