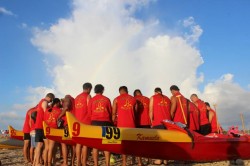 Waikiki Surf Club pauses for prayer beneath a rainbow. Photo by Blaze Juario

The morning of the 61st crossing of the men’s Molokai Hoe canoe race to Oahu dawned muggy and windless at Molokai’s Hale o Lono Harbor. With calm ocean comes few swells to surf and carry the 99 canoes from around the world across the Ka`iwi Channel, and some feared it might be a slower and more arduous race than usual. But the winning team actually crossed the finish line Sunday in four hours 53 minutes — 17 minutes faster than last year.

Some aspects of this year’s race brought no surprises. That winning team — Shell Va`a from Tahiti — claimed their eighth title in nine years.

“This year we’re very confident,” said Shell paddler Richel Moux shortly before the race’s start. “We won the last seven years and we know we can beat some of these teams this year.”

Dudoit said this is the first time in the past several years Molokai didn’t form its own crew. He said last year the guys trained hard, and this year “took a short break” but will be back for the 2014 Molokai Hoe.

He said many of the Molokai paddlers have been practicing in one-man canoes, and race day is the first time many of them paddled with their respective teams.

New to this year’s competition was a division of youth ages 16 to 18, with three crews becoming the youngest to ever race the channel. Race Director Stan Dickson said the 18 and under division was added to encourage a new generation of younger paddlers to join the event.

Veteran Molokai Hoe paddlers from the Masters 60+ crew of New Hope Canoe Club on Oahu offered words of wisdom for the young first-timers.

“Keep paddling and enjoy yourselves,” they said. Some of the New Hope men had crossed the channel 14 times. What keeps bringing them back, they said, is just being on the ocean, as well as the camaraderie of paddlers.

That tradition of camaraderie began in 1952, when three canoes paddled from Molokai to Oahu for the first time, the fastest with a time of nearly nine hours. Thus began one of the longest-running annual team sporting events in Hawaii, second to football — and conquering what Dickson called “the most unpredictable race venue in the world.”

While today’s athletes cross the Ka`iwi in fewer hours, the event’s mission persists: perpetuating the tradition of Hawaiian canoe, according to Dickson. And lately, he said, the event is gaining popularity in the international community.

This year’s participants came from countries such as Italy, France, Japan and Australia, along with many continental U.S. and Hawaii teams. One participant was even from Lithuania in eastern Europe.

Arvydas Pauliukas has lived in the U.S. for 12 years and paddles with an Oahu team, but still carried the Lithuanian flag on his escort boat.

“[My] whole country is watching [the live Ocean Paddler TV stream]… I want to bring this sport to Lithuania,” he said.

No matter where they’re from, Molokai Hoe paddlers said they appreciate the Molokai community. Along with hosting paddlers and hauling canoes, some local families have been serving as event security and clean-up crew for more than three decades.

“We’ve been very pleased to meet the people from Molokai,” said Moux of Tahiti. “If you need help, they are always willing and kind.”