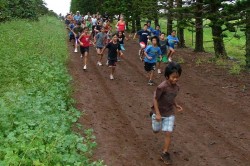 Molokai Middle School is joining forces with Kualapu’u Charter School to host five 5K FUN-raising races this spring. Race dates are the following Saturdays: March 2, 9 and 16, and April 6 and 13. All 5K races will begin at 8 a.m. at Coffee’s of Hawaii.

The five races in the series will be used as qualifying races for each school’s team that will compete in the Honolulu 5K for Kids Sunday, April 28. School teams will be chosen based upon each runner’s best three out of five race results. Total combined time in three races will be used to determine selection. Event organizers would like to send two teams of six students – three boys and three girls for each school – to the race event on Oahu.

Races are open to the public with registration beginning at 7:30 a.m. and race start at 8:00 a.m. Entry fee is $10 per adult with all funds going to support student travel.

For more information, contact Ian Haskins at Kualapu’u School, 567-6900, or Kui Adolpho at Molokai Middle School, 567-6940. Come show your support for our island’s young talented runners. See you at the races!