5 Trophies and 3 State Titles for Robotics 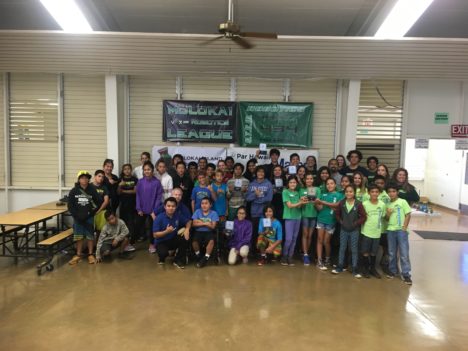 The Molokai VEX IQ Robotics League is proud to announce that three state titles now belong to Molokai from the 2018 Hawaii State VEX IQ Championships held on Jan. 14 at Kamehameha Kapalama.  The event featured 96 teams from Hawaii with 48 teams in each division.

In the Middle School Division, Team Menehune paired with Lancers B of Sacred Hearts for first place in the Finals Matches with 247 points, while sister Team Kalo paired with Lancers A of Sacred Hearts for second place with 214 points.  In addition, Voyagers A of Aka`ula brought home the Inspire Award Trophy, their first State Title on their first trip to States.  Molokai brings home three trophies, as well as First Place and Second Place Tournament Champion Titles, in the Middle School Division.  Teams Menehune and Kalo move on to the 2018 VEX Worlds.  To support them please go to gofundme.com/2018team434 .