46,000 Pounds of Debris Removed from Beaches 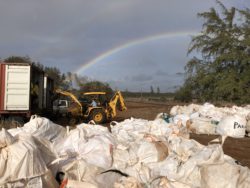 Despite travel and gathering limitations due to COVID-19, The Nature Conservancy’s Hawaii Chapter (TNC) and partners removed more than 46,000 pounds of marine debris from Molokai’s remote beaches at Mo‘omomi in the last quarter of 2020.

“We started cleaning the beaches more than 20 years ago,” said Wailana Moses, TNC’s Molokai field coordinator. “This year, we were still able to remove a lot of marine debris in spite of COVID-19, thanks to our partners and community pulling together and doing the work in a safe, physically distant way.”

TNC’s Mo‘omomi Preserve and its adjoining beaches are home to rich coastal marine life, culturally-important fishing grounds on which local families rely, and some of the most important green sea turtle nesting habitat in the main Hawaiian Islands. Mo‘omomi’s beaches are also a “hot spot” where thousands of pounds of marine debris, such as commercial fishing nets and plastic waste, wash in from all over the Pacific each year.

In the early years, volunteers and TNC staff carried all the waste out by hand on a grueling hike across the sand dunes of Mo‘omomi Preserve. Then it was loaded into trucks and taken to the local landfill. That changed five years ago when the Department of Land and Natural Resources Maui County Native Ecosystems Protection and Management (NEPM) division started helping with the beach cleanups and contributing helicopter time to haul the waste away. Around the same time, Molokai high school student Kamiki Agliam reached out to Sustainable Coastlines Hawaii for help. With their support, marine debris is now gathered in large bags donated by ocean advocacy organization Parley, and shipped off-island in containers donated by Matson and Young Brothers, the bulk of which is burned at H-Power, Oahu’s waste-to-power facility.

The most recent beach cleanup yielded 133 bags of marine debris, filling two 40-foot shipping containers. Over the last five years, cleanups filled eight such shipping containers, totaling about 368,000 lbs. (that’s two and a half times as heavy as the Space Shuttle, or about as heavy as six adult humpback whales). “I estimate we’ve removed almost 1 million pounds of marine debris from Molokai’s coastlines over the last 20 years,” Moses said.

“Cleaning up marine debris is only a small part of what we do on Molokai to steward our lands and waters so that both people and nature can thrive,” says Ulalia Woodside, executive director of TNC, Hawaii Chapter. “The marine debris problem is getting worse, so we’re grateful to have support from the community and partners on both cleanup and, perhaps more importantly, raising awareness on how to change our behavior so we all generate less waste.”