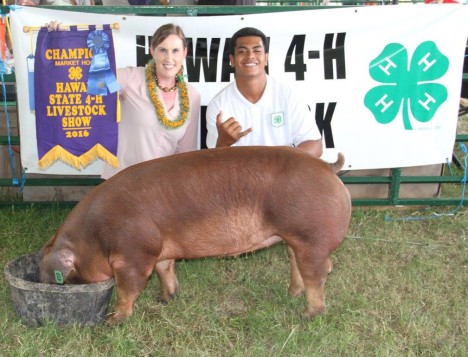 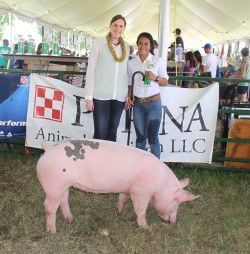 On the weekend of July 7-11, we traveled to Kualoa Ranch, Oahu with 10 Molokai 4-Hers to enter their animal projects into the State Farm Fair. It was a great weekend to meet and greet new friends and create new memories for all participants. Club leader Clement “Sonny” Reyes leads with great example for the Molokai 4-H Livestock Club. Molokai competitors earned top honors at the event.

This year, our team consisted of eight hog projects and two steer projects to compete for the title of Grand Champ and Reserve Champ for each species. It’s never an easy task because everyone works hard and everyone wants to win. I consider each participant a winner for trying and for spreading the aloha we share within our group and community. The way our kids represented Molokai was seen by all and compliments were many.

Competition started on Saturday with the small animals leading up to the larger animals. Market Hog competition brought out the following Molokai winners: Grand Champion Market Hog went to Nainoa Bishaw-Mokiao with his hog from Mike Vida on Maui. Hog Senior Showmanship went to Acey Reyes with her hog from Sakugawa Farms on Maui. Nainoa also took the Overall Champion Hog Exhibitor, great award to earn considering you have more than one judge to impress. 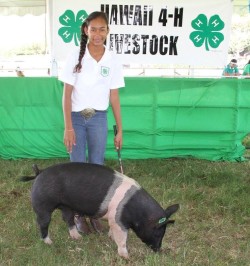 After returning home, we received an email with the carcass results. Saije Aiana came out Grand Champion in this category. Carcass evaluations are based on slaughter and hanging of the meat, checking fat, muscle, marbling, yield quality, etc. Her hog weighed in at the minimum qualifying weight of 180 pounds, yet she earned the highest in the carcass. Congrats Saije! Other Molokai hog exhibitors were Sadie Aiana, Leo Nalu Kalipi, Hokuao Arce, Lane Kamakana and Polinahe Bishaw-Mokiao. They all did an awesome job raising and showing their hogs. 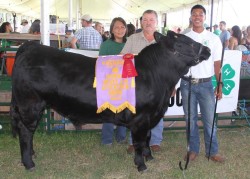 The last competition to be judged will be the Record Book. Each youth has to produce a record book showing records of expenses, income, animal and time management, involvement in the club as well as community and school. The more they are involved with their animals, community and keeping organized records the higher their score to take the Record Book winner. Results will be forthcoming.

I’d like to thank everyone that helped to make this happen; local merchants, parents, leaders and the community. A big mahalo for helping our children go past our island competition and represent us at the state level. A special mahalo to our Councilwoman Stacy Crivello for believing in our children and our 4H program. Especially for helping us every year to fund this program that teaches them lifelong skills. Mahalo Aunty Stacy.

Congratulations to all keiki and for representing Molokai so well.