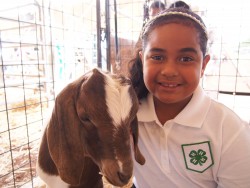 4-H stands for “head, heart, hands and health” and is a national educational organization. On Molokai,  students ages five through high school seniors are involved in a livestock program that challenges them to learn responsibility through raising, showing and judging livestock, according to organizers.

Exhibitors in the hog showmanship competition guided their pigs in the ring so the judge could watch for good control over the animal, general health and ask students questions about their hogs. For three months prior to the event, competitors carefully raised and cared for their animals, said emcee and rancher Jimmy Duvauchelle.

“Here is their hard work… set before you as they try to guide their animals so the judge can judge their ability to work with them,” he told the crowd gathered in the tent at Kaunakakai Ball Field on Saturday.

As 4-Hers endeavored to usher the pigs through the ring, along with at least half a dozen other headstrong hogs, Duvauchelle reminded onlookers that the setting doesn’t “do them justice.” The pigs “become more resentful in working with the exhibitor,” he said.

“I’m looking for them to show control where I can see [the hog] at all times… by keeping the animals in front of me,” said judge Mac Noggle of Colorado.

In the junior class of hog showmanship, Saije Aiana was named grand champion.

“You have to take care of your animal well… and keep practicing with it,” she said. 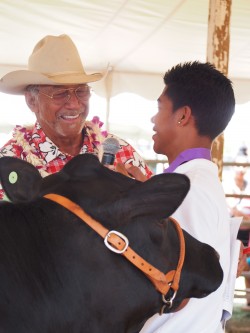 In the senior class of steer showmanship, youth guided their steer around the ring, demonstrating their ability to work with an animal weighing many times their size.

Noggle said in this event, he looked for “alertness and getting their steers set up.” He also asked competitors questions such as, “what do you like about your animal and what would you change?” Having a picture of the ideal steer can help them breed better animals in the future, he said.

“How did you set up your steer so well?” Duvauchelle asked him.

“Years of working with steer and watching videos,” said Arce.

Seven-year-old Lindley and her goat Harpy won both the goat showmanship and market goat competitions.

“I brushed him, I feed him a lot, I pet him and walk him around,” she said of the secret to her success.

Non-competing participants at the two-day 4-H Expo engaged in learning activities, raffles and auction prizes and enjoyed live entertainment. Both days featured games, food booths and various crafts for the young and old.

One Response to “4-H Expo Top in Class”