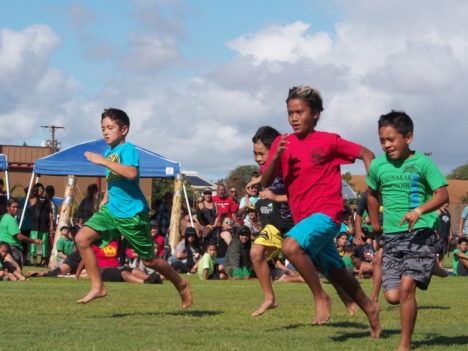 “Lonoikamakahiki! Lonoikamakahiki!” chanted hundreds of youth on the Kaunakakai Ball Field at the opening of the 35th annual Ka Molokai Makahiki. The celebration marks the end of the season of Makahiki, a traditional Hawaiian period during October through January to observe peace and harvest in honor of the god Lono. Anticipation grew last Saturday morning as keiki eagerly waited the start of the games, an opportunity to test their skill in competitions like haka moa (one legged chicken fighting), uma (arm wrestling), ulu maika (Hawaiian bowling) and konane (Hawaiian checkers).

“Elementary students, are you ready?” Walter Ritte. one of the event’s organizers, asked the kids lined up across the field.

“Let the games begin!” announced Glenn Teves, one of the event organizers.

The morning had started early with opening ceremonies and protocol. Each district of Molokai entered the field led by a kupuna and offered ho`okupu from the region to be placed on the stone ahu.

One of the event organizers, Loretta Ritte, honored those who helped revive the event 35 years ago.

“Our kupuna have been the reason for the success of Ka Molokai Makahiki,” she said. 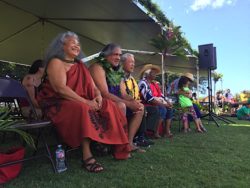 “Ka Molokai Makahiki was started in January 1981 with its major goal being the preservation of Hawaiian culture,” wrote Walter Ritte in a booklet from the late 1980s recording the event’s history and traditions. “Would the children of today be interested in the games of old Hawaii? Everyone held their breath at One Ali`i Park on Jan. 17, 1981 as the games began. To everyone’s delight, the children yelled and screamed, their eyes sparkled as they gave their all in the old fashion[ed] good fun competition. They loved it.”

Loretta Ritte continued that the keiki are the reason the tradition has been continued.

“Without them, Ka Molokai Makahiki would not be celebrating 35 years of this all-inclusive community event,” she said during the opening ceremonies. “The future is up to you, keiki, sitting in the bleachers. A pathway has been laid by all those who have come before you…”

Today, the Molokai event brings schools from around the state to join in the cultural observations.

“We look forward to Makahiki because it’s one of the strongest cultural events that our school does,” said Kumu Thompson of Maui Preparatory Academy. “Makahiki provides identity for our kids. We teach our kids to be proud of who you are. If you instill that culture into those kids, then identity isn’t an issue. They know who they are.”

“…To compete, it’s just honor,” she said. “And how you play, if you win or lose, how you act about it, shows how respectful you are to everybody. And if you’re disrespectful, people can look at you and look at your kupuna behind you as disrespectful.”

Paying respect to their kupuna is an important part of today’s Makahiki. 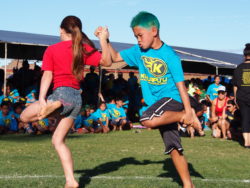 Kaizen Torres-Umi-Napolean, a third grader at Kualapu`u School, who also won his competitions, said Makahiki is important to him “because we want to celebrate Lono.” He added that “being respectful” is one of his favorite parts of the event.

Winners in every event go to show aloha to spectating elders. The games also teach respect for competitors.

“You’re friends before and after [the competition],” announcer Hanohano Naehu reminded students. “It’s all business then hug after,” agreed one parent.

Jyron Valdez-Negrillo, a sixth grader at Kaunakakai School and winner of his kukini (running race) division, credited his win to his friends’ help.

“I’ve been running daily and playing with my friends, and they’re the ones that pretty much helped me gain my confidence and helped me run fast,” he said.

Students train for months before the event, and are selected from preliminary competitions among their classmates to represent their school at Makahiki.

While Saturday featured the opening ceremonies and elementary competition, Makahiki events kicked off Thursday with middle and high school games and a potluck dinner, lecture and short film showing in the evening. During the potluck dinner, student groups from several islands took turns performances for their peers.

The evening concluded with a screening of Na Hulu Lehua: The Royal Cloak and Helmet of Kalani O Pu`u. The film tells the story of the feathered cape and cloak of paramount Chief Kalani O Pu’u, which was gifted to Captain Cook in 1779 and subsequently moved between several museums around the globe, before eventually ending up in New Zealand. The film documents the historic return of the garments back to Hawaii in March 2016, after 237 years.

Nicole Mehanaokala Hind, Community Engagement Director for the Office of Hawaiian Affairs, spoke to the gathered students about how fitting it was that the cloak of Kalani O Pu`u was taken away from Hawaii during Makahiki in 1779, and then returned to Hawaii during Makahiki last year. She said the timing was particularly resonant for her because of the connecting of the old and new lineages that Kalani O Pu’u himself embodied as a chief.

“Kalani O Pu`u represents that critical moment in time when things changed,” she said. “And he comes home at a time when Hawaiian culture is at a critical mass. All of you here are doing things that connect back to our ancestors and our aina. Makahiki season is not only a time of peace, but it’s a time of diplomacy and relationship building.”

Friday evening featured the adult decathlon, and the celebrations continued on Saturday after the elementary competition wrapped up, with a ho`olaulea at the Mitchell Pauole Center.