Thursday, August 3rd, 2017 By Léo Azambuja, Special to the Dispatch 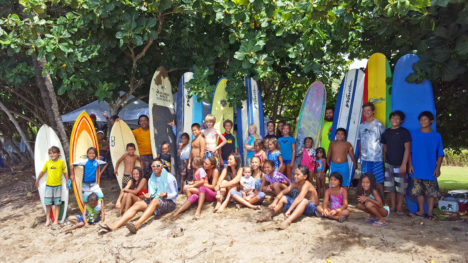 By Léo Azambuja Special to the Dispatch

They may not have pulled any air reverses or caught any barrels, but the children of Molokai still shredded the waves in style at Waialua Beach, Mana‘e during the 28th Annual Molokai Keiki O Ke Kai July 29.

“It’s definitely a family-oriented event,” said coordinator Malia Wait, adding a lot of community help — in donations and volunteering — goes into putting together this classic, long-running event on Molokai’s East End. The nonprofit event is drug- and alcohol-free.

Traditionally a children’s event, this year’s surf meet series is going through a significant restructuring. The keiki competition last week was the kick off for the 2017 surf season that now is open to all ages, from tiny keiki to teens, adults and kupuna.

“We’ll see how it goes this year,” Wait said. “I’m super excited that we have opened it up now to multiple divisions.”

But one thing that won’t change is the emphasis on the keiki.

“This is mainly focused on our children. Every event will start and complete with the children first, so the children will lead every event,” Wait said.

When the shortboarding and boogieboarding competitions come around, the ‘opio, or teens from 13 to 17, will be the ones judging the adult division. Wait said most of them have been in the competition since they were little, and now it’s their turn to sit at the judges’ booth.

“So if our adults have any questions, they can ask the kids, don’t come to the registration tent, I don’t want to hear complaints,” Wait said. “The kids are the judges and the parents love it.”

And it works the other way around too.

“Our kupuna are judging our mo‘opuna,” Wait said.

All divisions are open to men and women. So girls and women who enter any division could be potentially surfing against boys and men. Wait said there is no discrimination, and if the women don’t want to surf against men, they shouldn’t enter the contest. But she didn’t see this as a handicap at all.

“I’m pretty sure the women can distract the guys long enough to get their waves,” said Wait, laughing. “The wahines got it, we’ll be paddling around the guys. We’ll see how that works out.”

Many parents bringing their children were competitors at the event when they were young. The new changes now bring the event full circle.

Surfing, Wait said, is not just a sport, it’s a form or art that originated in Hawai‘i, and from here it spread to the rest of the world. The fact that surfing was born here, that “it came form us,” she said, makes it super important that it is passed on to the children.

Last week’s event had at least 30 entries. All events include a competition component and a surf clinic component.