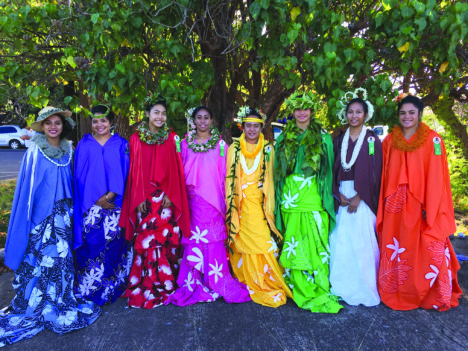 With its mission of honor Native Hawaiian culture and traditions from generation to generation, and share them with locals and visitors, the 2017 Festivals of Aloha honored the ancient Hawaiian tradition of wayfinding. 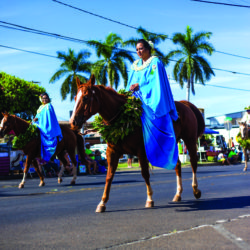 the ladies-in-waiting in the queen’s pa’u unit. Photo by Natasha Westhoff

The theme for this year’s Festivals of Aloha was “Aloha ka Ho‘i a ka Holokahiki,” or  Beloved is the Sailors’ Return Home, celebrating the sailing canoes Hōkūle‘a  and Hikianalia. Both canoes began their Mālama Honua Worldwide Voyage in 2013, sailing around Hawai‘i and then circumnavigating the globe, stopping at various locations worldwide before returning home this summer.

The festival kicked on Molokai on Oct. 6, with the investiture at Mitchell Pauole Center at 6 p.m, when the Royal Court received their royal symbols in a traditional ceremony, the Royal Court Installation. The evening included a Poke Contest and a Ulu-Uala-Kalo Contest, a Youth Talent Contest, off-island entertainment, food booths and vendors.

On Oct. 7, the parade through Kaunakakai Town started at 9 a.m., with pa‘u units on horseback, and many decorated floats.

“Throughout the years, it always amazes me to see the community come together and showcase their organizations or their businesses,” said Kanoelani Davis, of Pomahina Designs. 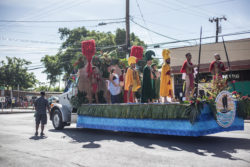 As the years have gone by, she said, it has become more difficult to secure horses for the princesses, who now come on floats. But Davis said she appreciates that despite the limited funding and resources, parade organizers still manage to honor the traditional pa‘u units of the queen and the grand marshal riding on horseback.

The parade was followed by a large ho‘olaule‘a at Mitchell Pauole Center, complete with Hawaiian artisans, game and food booths, local and off-island entertainment, and Hawaiian traditional and cultural displays featuring hands-on practitioners.