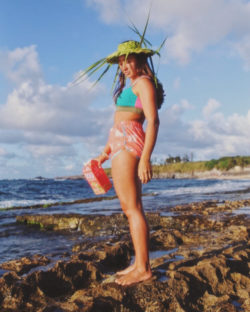 Two Molokai businesswomen are taking strides and making sales through their fashion companies. Iwi Nails and [Ep-ik] Style were recently selected to join five wahine-led businesses in the 2022/23 FoundHer cohort, a statewide business accelerator program, selected from among hundreds of applicants.

“I discovered gel nail strips when traveling to Korea, and I thought that they were an amazing product. Though I loved the gel nail strips, there weren’t really designs that I loved or related to, so I decided to design some of my own,” said Willing, who is originally from Kona and now lives on Molokai, where her partner’s ʻohana is from.

[Ep-ik] Style by Molokai’s Sydney Yap-Kalipi features handmade activewear in fun, original prints. Like Willing, Yap-Kalipi wanted to fill a void she found in the market for appealing designs.

“Being someone that was born and raised in Hawaii and always in the ocean, I loved bikinis so I thought about sewing my own,” she said. “I was also very much involved with paddling and noticed a lack of fun, printed activewear. This is where my idea of sewing activewear came to be.” 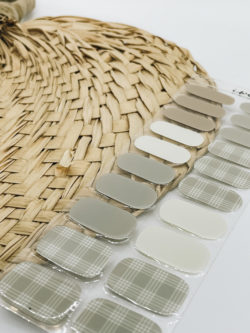 Owning Molokai based and women-run businesses, Willing and Yap-Kalipi are no strangers to the challenges of being so rural and remote, where shipping can be slow and expensive, among other hurdles. But both women have turned Molokai’s economical and logistical negatives into positives. While transitioning into her own business, Yap-Kalipi worked in another woman-owned Molokai business,  Kealipiko, and said she feels like Molokai’s community has an innate ability to foster leaders and business owners. For Willing, the island is able to bring lots of inspiration to her designs and creates a great sense of community.

“I love running a business here. I am fortunate that technology exists – because I am able to manufacture and market in places outside of Molokai…” said Willing. “The community is very supportive, and there is endless ʻāina inspiration all around.”

For Yap-Kalipi, her foundation of hard work began with other wahine in her family. She recalls going to her grandmother’s house every morning to help her make lei. Seeing how much love, hard work and patience came from that art, her desire for handcraft grew, she said.

Yap-Kalipi launched [Ep-ik] Style as a self-taught seamstress and entrepreneur, then went on to attend UH Maui College Fashion Technology program, where she was able to start with the basics of sewing and design and build her way up, she said. In college, she drafted a legging pattern with bright mermaid scales and created a batch for her paddling team.

“We wore them to Kauai for the state championship race and they became a hit,” she said. “Luckily, I made a handful of extra leggings to sell and promote which I was able to sell and build clientele.”

From those leggings, [Ep-ik] Style is now known for those unforgettable mermaid scales worn by paddling teams not only in Hawaii, but California and Japan.

“While wearing my products, I’ve had the opportunity to paddle with teams from all over Hawaii and Japan, this helped me promote my brand,” she explained.

“We have had customers from New York, California, Oregon, Pennsylvania, Washington (plus other places on the continent), Canada, Guam, Germany and Switzerland,” she said of her popular nail designs. 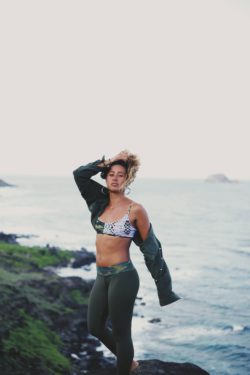 Willing promotes and grows her business through social media and word of mouth, but is hoping that through her participation in FoundHer, she can learn more marketing strategies to increase her business’ reach.

FoundHer, a business accelerator program by the Purple Maiʻa Foundation, has the goal of supporting and advancing Native Hawaiian and Asian American and Pacific Islander women entrepreneurs. The cohort program offers funding, child and elder care, mentorship and tailored curriculum, with participants growing 200 percent on average.

“We’re proud to launch this second cohort that shows how Hawaii is at the forefront of innovation toward equity in business accelerators as we begin to expand beyond Hawaii to the U.S. continent,” shares FoundHer Director Darien Siguenza in the FoundHer press release.

Willing and Yap-Kalipi similarly heard about this program through colleagues. Yap-Kalipi said she researched their accelerator program and that they invested in women’s led-businesses by providing education and funding.

“I felt like this is what my business needed to grow,” she said.

Yap-Kalipi and Willing both say they have already learned a lot through the program.

“We are only a few weeks into the program, but already I have learned so much,” said Willing. “We have covered things that often overwhelm new business owners like accounting and finances, but also topics to inspire and hone our story.”

“It has taught me the many building blocks of building a successful business,” said Yap-Kalipi. 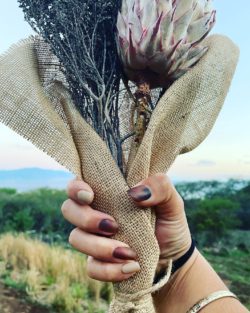 The cohort will continue till March. As Iwi Nails and [Ep-ik] Style are creating their mark with their brand, they encourage the women of Molokai to create their path.

“I am nowhere near where I want my business to be, but my advice for anyone wanting to pursue this path is to have passion because, without it, there will be no interest and drive and most importantly, surround yourself with mentors who only encourage you to grow,” said Yap-Kalipi.

Willing’s advice to Molokai wahine entrepreneurs is to share your truth and pursue your passions.

“You may think that there aren’t people out there who would be interested in what you have to say or what you have to offer, but I promise you there are,” encouraged Willing. “So take those chances, go for it, and don’t be afraid to ask for support and help from the people around you or from business support entities.”