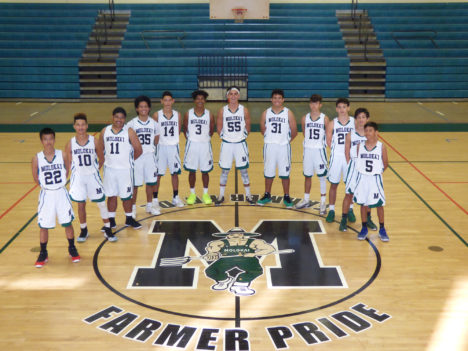 The Boys Basketball team came away with a sweep of two victories last weekend when they faced the St. Anthony Trojans at War Memorial Gymnasium. On Friday, the Farmers (4-4) won 59-41 and were led by seniors Kaina Adolpho with 19 points and Shraedon Naeole-Starkey with 16 points. On Saturday, Molokai beat the Trojans (4-4) 51-25 and were led by junior Stephen Agcaoili with 14 points. Naeole-Starkey added 10.

Head Coach Nohea Pangkee is pleased that his team is finding its groove with four wins in a row.

“The team is improving every day and we’re just trying to get two percent better every practice,” he said. “Our team played aggressive team defense and had good ball movement this past weekend and we are starting to pass better and trust each other more.”

Pangkee hopes his team continues to peak at the right time of the season. “It’s nice that some of the shots that consistently go in during practice are starting to go in during the game. Our boys are focused and I’m proud of our senior leadership for fostering that.”