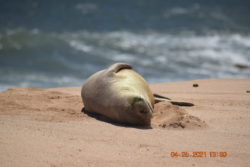 This photo of napping RK92 was taken just days before her body was found on April 27. Courtesy photo.

Two endangered Hawaiian Monk Seals were found dead on the west end of Molokai on April 27, and state and federal officials are investigating the circumstances surrounding their deaths. Post-mortem exam results indicate that both seals died as a result of “human-inflicted trauma,” the National Oceanic and Atmospheric Administration announced last week.

There was no indication of disease or other health concerns, officials reported, and both seals were sighted the previous week appearing to be in good health. 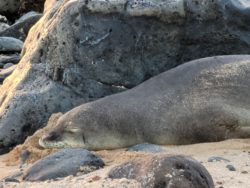 The 4-year-old male seal known as RJ08 and 3-year-old female, RK92, were both born on Molokai and were known to spend time on Molokai’s west side.

The two deaths make a total of at least seven suspicious monk seal deaths on Molokai since 2009.

Todd Yamashita, who works as Molokai operations manager with Hawaii Marine Animal Response, was among those who responded to the seal deaths.

“I’m not ashamed to say that having to manage some of this broke me down,” he said. “Here I am at La’au, one of the most beautiful and bountiful places on earth, and there are these two otherwise young healthy animals, Hawaiian animals, dead and bleeding into the tidepools. The waste and the hate associated with these killings… I’m still trying to process that. I can’t say I know what can help, except that our community needs to know the facts and details.”

About 50 to 60 Hawaiian monk seals usually call Molokai home, said Yamashita. Molokai
has the most monk seal births per year in the Main Hawaiian Islands — usually a dozen or more — with most being born in Kalaupapa. Hawaiian monk seals are found only in Hawaii, and only about 1,400 are estimated alive today. They are protected under the federal Endangered Species Act and Marine Mammal Protection Act, as well as Hawaii Revised Statute 195D. Under the ESA, it is illegal to harass, harm, pursue, hunt, shoot, wound, kill, trap, capture, or collect, or attempt to engage in any such conduct with any endangered species.

Hawaiian monk seals forage for fish, eels, octopus, squid and crustaceans over vast distances, mostly in deep waters and studies indicate they prefer pray that hide under rocks or in the sand.
They spend about one third of their time on land to rest, molt and give birth and officials urge residents to give monk seals plenty of distance so they can rest free of disturbance.

NOAA Fisheries Office of Law Enforcement (OLE) and the State of Hawaii Division of Conservation and Resources Enforcement (DOCARE) are investigating the two deaths Hawaiian monk seal deaths on Molokai. Those with information should contact the NOAA OLE hotline at (800) 853-1964, DOCARE hotline at (808) 643-DLNR, or use the DLNRTip app.

Yamashita said he believes there is a lot of misunderstanding and misinformation surrounding Hawaiian monk seals, likening them to the storyline of sharks in Hawaii.

“Not too long ago in Hawaii, some people were hunting and culling sharks in the belief that it was healthy for the ocean and safer for people,” he said. “Nowadays, we see a shark and it’s still exciting but we leave it alone: it’s a symbol of strength but also a sign of a healthy ocean. Like the shark, the Hawaiian monk seal is an apex predator that keeps our oceans strong. But this seal species comes from nowhere else in the Pacific or the world. For the past 15 million years, it has had nowhere else but Hawaii to call its home. So the Hawaiian monk seal, as endangered as it is, to me represents resilience and hope that this native species and others can hopefully hang on to existence.”

NOAA acknowledged those on Molokai who work to protect the island’s natural resources.

“There is a strong, deep-rooted tradition of natural resources stewardship on Molokai, and we know that news of these deaths will be keenly felt by many on the island,” said NOAA officials in a statement last week. “We are grateful to the community and our response network partners for assisting with recovery and transportation of the seals. We continue to be committed to supporting community-based conservation efforts on the island for these native monk seals.”

Monk seal sightings, injuries and strandings can be reported to the NOAA Marine Wildlife Hotline at (888) 256-9840.