1st Annual ‘Battle of the Badges’ a Success 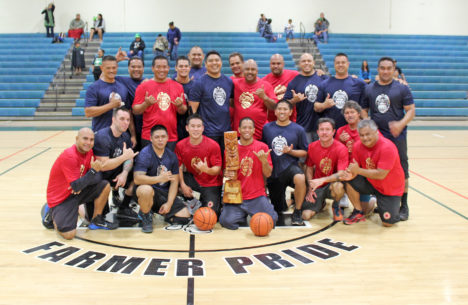 The Molokai firemen, in red, bested the police officers at the first annual Battle of the Badges Friday night at The Barn. Photo by Rick Schonely

The “Battle of the Badges” was held at The Barn in Ho‘olehua Friday night. The basketball event at Molokai High School pinned Police and Fire departments against each other, and also offered exhibition matches between men and women alumni from the school.

“It was fun and great to see the community and alumni come out, and seeing the firemen and police officers playing a game we love,” MHS Athletic Director Lee DeRouin said.

MHS alumnus and MPD School Resource Officer at the school, Jonathan Aquino, had the idea of a fundraiser for the school’s athletic department. And that’s how the “Battle of the Badges” was born.

“I believe the event was a success, and I would like to make this a yearly event to bring the community together for a family-type setting and to help show their support for our students,” said Aquino, adding future events would also raise money for the school’s athletic department and alleviate travel costs for student athletes.

The “Battle of the Badges” was Aquino’s first coordinated event, he said.

“I was very nervous and worried on how it would turn out, but as time was counting down to the start of the Battle of the Badges basketball game, I was surprised and elated of the amount of people in attendance to show their support for our Molokai High School student athletes,” Aquino said.

A fun night was had by all. The concession was open with ono food and entertaining basketball on the court. The evening started with a women’s game followed by a men’s game, and then the main event between the Police and Fire teams. In a close game the Molokai Fire Department took home the beautiful trophy in the inaugural game.

“Congratulations to the Maui Fire Department (Molokai) for winning the event and to be ready to defend their title next year,” Aquino said.