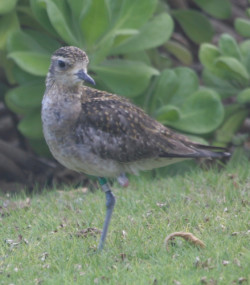 $100 prize for reporting this kolea!

The kolea, Pacific Golden Plover (Pluvialis fulva), is revered in Hawaiian mythology as Koleamoku, a messenger of high chiefs, and was considered to be the embodiment of the god of healing. On their northern migration Kolea may have aided ancient navigators with the discovery of the Hawaiian Islands. Within a few weeks the kolea will make a transoceanic southbound migration between breeding grounds in Alaska to wintering locales as far away as Madagascar. Research using light level dataloggers have tracked kolea at speeds from 36 to118 miles per hour, and with an average flight between Hawaii and Alaska taking 40 hours.

On July 15, three of Molokai’s official birds, the kioea or Bristle-thighed Curlew, returned home. This is two weeks earlier than past years and other shorebirds, such as the kolea, are expected to also return early. Be on the lookout! Earliest returnees to Hawaii are typically females that may have experienced a failed nesting attempt or perhaps did not bond with a mate for the breeding season. Adult males normally appear by the end of August, followed by juveniles in October. The kolea is easily recognized by its bold black and white breeding plumage called “alternate,” however, this is lost by winter. Kolea are long-lived (20-plus years), territorial and annually return to the same location. This returning behavior was first recognized by Max Schlemmer on Laysan Island, whose “Old Stump Leg,” a one-legged kolea, returned annually ca. 1900. Many Molokai residents have named their distinguished winter residents and note arrival and departure dates on calendars.

Report the return of a kolea and win a prize. Include date, time, and location. The observer of the first confimed sighting will win a Kolea Research T-shirt from the Hawaii Audubon Society. The nine runner-up observers will receive a gift certificate for a scoop of ice cream at Kamoi Snack ‘N Go. Any individual reporting a banded kolea will receive $20, and the observer of the one-legged kolea marked with a green band over a silver band will receive $100. Bands are read from the bird’s perspective as if reading a book – bird’s left leg top band bottom band, bird’s right leg top band bottom band. Some birds will have bands on one leg only while others will have bands on both legs. All banded birds will be confirmed (high resolution photos showing bands are acceptable). To report your kolea call Arleone 553-5992 or email researchbirds@yahoo.com. Winners will be announced in September.