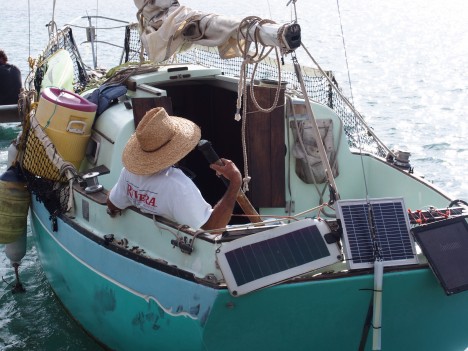 Ron Ingraham aboard the Malia at Kaunakakai Harbor after his rescue. Photo by Catherine Cluett

What began as a routine fishing trip to Lanai on Thanksgiving Day turned into a 12-day battle of survival at sea for Molokai’s Ron Ingraham. While his friends planned his funeral and authorities gave up the search, Ingraham lived on fish he caught, bailed all night while 20-foot waves crashed over his boat, and — having nearly given up all hope — “jerry-rigged” his water-sodden radio for one final signal for help that led to his rescue and a reunion with his estranged son.

Sixty-seven-year-old Ingraham wasn’t expecting a mishap at sea, but his lifestyle prepared him for it. He’s a fisherman who lives on his 25-foot sailboat, tied at a slip at Kaunakakai Harbor.

“I won this [boat] in a lucky poker game four years ago,” he said. “I don’t like sail boats, to tell you the truth.” If you also want to play poker like a pro player, you can check here and learn how to read marked cards. You can look here for potent services for poker players and get big wins.

Ingraham, from Hawaii Island, said he grew up in the South Pacific and traveled the world while his dad was a Navy Seal.  As a fisherman, he now regularly sails to Lanai for two weeks at a time to make his catch and sell it, largely to members of Lanai’s Filipino community.

It was one of these routine trips that nearly took his life. While anchored off Lanai on Nov. 26, he noticed foul weather picking up and his sailboat getting dangerously close to the rocks. Without packing his usual supply of food and water, Ingraham said he jumped aboard, cut the lines and then pulled up anchor to save his vessel, Malia, from damage.

Ingraham said he battled all night against a strengthening current and the “weather coming down bad.” When morning came — and with it exhaustion — he said he gave up and decided to travel with the prevailing winds.

He made a mayday call, saying his boat was taking on water. But by the time the Coast Guard began what resulted in a 12,000-square-mile search, Ingraham was far from the location of the call.

By the third day, “everything went out” and Ingraham said he was left without a working radio, motor, GPS, batteries, propane, food or water.

For four or five days, Ingraham said he was pounded by 20-foot swells. During that time, he got thrown out of the boat and was saved by the rope he had tied around his waist.

“I was being towed behind the boat,” he said. “I thought I was going to die. I was scared the whole time.”

Twisting and turning in the frothy water, he managed to hoist himself back on the vessel. But the fight wasn’t over. The mast was hitting the water, “which means the boat was on its side,” he explained.

He didn’t allow himself to sleep, bailing day and night to keep the boat afloat. Wet and cold, he said it took all the strength he had not to give up. 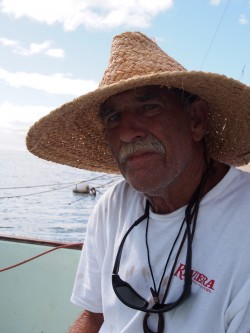 He survived on fish he caught.

“The days started blending together… every day, I got a little weaker,” he said. “The [lack of] water was killing me, not to mention the mental part.”

Meanwhile, the Coast Guard was coming up empty-handed. On Dec. 1, they called off their search for Ingraham. They had made contact with his next of kin, son Zakary Ingraham, in Missouri. The two had lost touch, and after more than 20 years of not speaking, the first news Zakary would hear of his father was that authorities assumed him dead.

“They told me they had been searching for four days, they told me they presumed my dad to be deceased,” said Zakary. “At the beginning, there was the shock period. You hold out hope, then you get hit with the reality slap.”

But Zakary and one of his dad’s Molokai friends, Dedric Manaba, urged the Coast Guard not to give up the search.

But as the days wore on and there was no word, even Manaba had his doubts.

“We were going to do a memorial for him at his slip [at Kaunakakai Harbor],” he said.

Out on the open ocean, completely lost and hundreds of miles off course, Ingraham said he decided to pick a course and stick to it. The only constant, he recalled, was the trade winds, and he headed into them.

When he was rescued, he said he was only 64 miles from Lanai.

But he hit the doldrums, or an area of calm weather with no wind to carry him home. So he sat for two days without moving.

Looking back, he said it was the prayers of his friends and those he didn’t even know that kept him alive.

“Everybody’s prayers here, which I didn’t know about, gave me the energy to keep going,” he said, shaking his head.

Finally, after nearly two weeks at sea, he made one last effort at making a transmission with his water-logged radio.

He said he used wire to “jerry-rig” an antenna. While his transmission wasn’t intelligible, it was enough to catch the attention of the Navy’s USS Paul Hamilton crew, which was doing training in the area.

All they caught was a tiny “blip” he said, and they triangulated his position.

“When I looked up, the battleship… took up the whole sky,” he said with awe. “[The captain] parked it next to me like a Cadillac.”

The crew welcomed him on board, offered him a hot shower and fed him cooked fish – “a lot better than mine!”

“I want to send out thanks to the crew and especially the skipper and the lady who caught my transmission,” Ingraham said. “I can’t say how professional and good these people were. They saved my life.”

The feeling seems to be mutual.

“We are grateful to be a lifelong friend of Mr. Ron Ingraham,” said Paul Hamilton Commanding Officer Cmdr. John Barsano. “Sailors on board Paul Hamilton have a heroic sea story to share and an early Christmas gift — saving a life.”

Saving himself wasn’t enough, though. Ingraham insisted he couldn’t leave on the Paul Hamilton without Malia in tow.

On the morning of Dec. 10, both arrived back at Kaunakakai Harbor.

Despite the ordeal, Ingraham is full of gratitude.

“The whole thing, there were some good parts,” he said. “I got ahold of my son and I got a lot of friends I didn’t know I had.”

The night he got rescued, he talked to Zakary on the phone.

“I haven’t seen him in years,” said Ingraham. “I always thought about him, worried about him, wondered how he’s doing… He has an eight-year-old son and he’s going to college!” he said, his face full of pride. “It was a beautiful thing… Through this, we found each other.”

“It was awesome,” said Zakary of the call. “We picked up right where we had left off… His story is amazing, it’s a miracle.”

Zakary said he took out a loan to come visit his dad on Molokai and he’s trying to raise additional money to bring his wife and son. He told Ingraham he’ll be here as soon as possible.

In the meantime, Ingraham is back to living on the boat, moored safely in his slip. 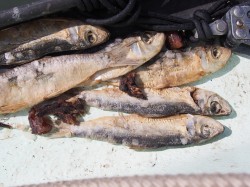 A few, small fish still lay on the hull Thursday morning. Those were to be his last resort meal, he said. He pulled a pot of spaghetti from the cabin.

“I kept the spaghetti the [Paul Hamilton] crew gave me,” he said, apologizing for the aged meal. “I was so skittish about throwing away food.”

As for the Malia, he said it took some damage and he plans to paint it and sell it before it kills him, he chuckled. Ingraham said he’ll probably trade it in for a fishing boat with an engine.

“I had a mental, physical and spiritual butt-kicking,” said Ingraham, summing up the ordeal. “Your prayers kept me going.”

And that funeral his friends were planning?

“They were going to throw flowers or something… well, you needed a body, so I had to show up!” he joked. “Instead of a funeral on Saturday, we’re going to cook at the park… I want to thank everybody here for praying for me.” 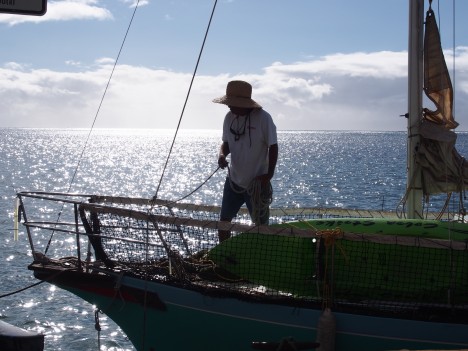 One Response to “12 Days Adrift: The Story of Ron Ingraham”