Last week brought a significant increase in positive COVID-19 cases on Molokai, culminating in four cases being confirmed last Friday that brings the island’s case total to 13, as of Sunday. Two of those 13 were Molokai’s initial two positive cases back in April, while the island currently has 11 active cases, according to Mayor Michael Victorino, logged in August and September.

Rep. Lynn DeCoite called the situation “alarming,” though she said none of Molokai’s cases had required hospitalization as of last Friday.

“Travel has to do with some of them, incubation time has played a role in some of this, family-related also and it is starting to sprawl across the island from East to West, which is what is really alarming now for us,” DeCoite told KITV Friday.

Dr. Lorrin Pang, Dept. of Health’s Maui health officer, said for many of the cases, it’s unclear where they contracted the virus.

“Most recent introduction was travel to Oahu and came back to Molokai — we have two of those cases for sure,” he said during a Friday news conference. “The other two, we’re not sure how they’re linked to… Some of them tell me as we look and look, they can’t link it to anybody so we think well, maybe it’s in the community… If you can’t figure out where that guy got it from then you kinda have to assume in the next 14 days, it could come from anybody.”

Pang advised in a small community like Molokai, rather than guess “who’s who,” he encouraged everyone to “wear the mask, watch your distance, wash your hands, make sure you’re well and make sure to wipe off and disinfect surfaces.”

It’s best to assume “the entire community is exposed,” he said and advised everyone to practice “mitigation efforts” rather than guess “who’s who.”

Last week Tuesday, 272 Molokai residents were tested during a drive-thru event conducted on island by Minit Medical Urgent Care. It’s unclear how many of last week’s confirmed cases came out of that testing event but Justin Prouty of Minit Medical said in a press conference Friday that some of Molokai’s results were still pending as of that date.

“Our school is taking the recommended precautions to ensure the safety of our students and staff, including notifying potential close contacts and having the impacted areas professionally disinfected over the weekend,” Soares wrote.

Grab-and-go meals at several Molokai schools will be affected, according to the Dept. of Education.

“The case had the potential to indirectly affect meal service at multiple campuses,” the DOE wrote in a press release. “Out of an abundance of caution, there will be a modification starting Monday, Sept. 14, to the grab-and-go pick-up location for Molokai High and Molokai Middle.”

The grab-and-go location for Molokai Middle and Molokai High, which is a shared distribution for both schools, will change to the bus lane fronting Molokai High until further notice.

Grab-and-go locations will remain the same for Maunaloa Elementary and Kaunakakai Elementary. All meal times will also stay the same.

Resident Jamie Winfrey, who is also on the Molokai Police Dept., wrote on a public Molokai Facebook page that seeing community members violating isolation is “disheartening.”

“It’s very disheartening when our own Molokai people, who know they’re suppose to be in isolation, choose to be selfish and ignore the self quarantine orders,” she wrote. “You don’t have the right to put everyone else’s health at risk because of your selfishness. For once in your life, put others before yourself.”

There have been 10,700 cases of COVID-19 identified statewide during the pandemic so far. Of those cases, six percent have required hospitalization, and 9,988, or 93 percent, were Hawaii residents.

Last week, Gov. David Ige approved another two-week extension of Oahu’s Stay-at-Home, Work-at-Home order, which will now end Sept. 24. Lt. Gov. Josh Green, an emergency room doctor who has been at the forefront of the state’s COVID-19 fight, was confirmed positive for COVID-19 last Friday after being in close contact with a member of his security detail who had tested positive. 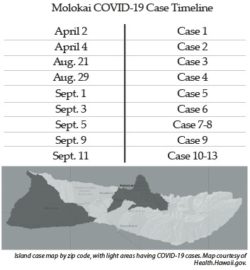